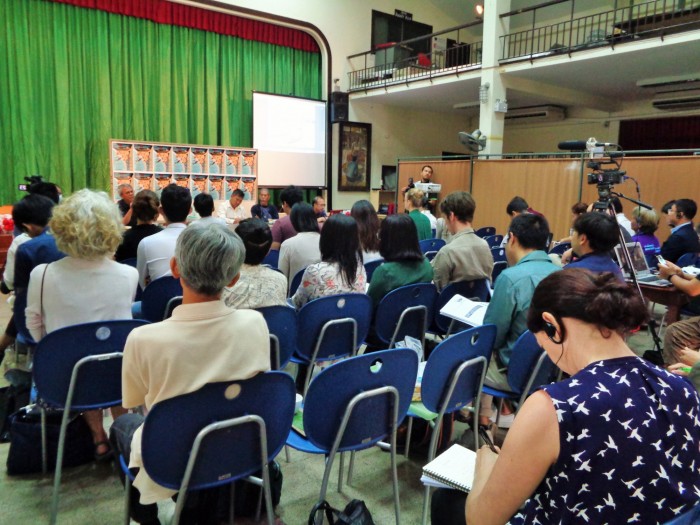 Today, Thursday the 9th of August, the gathering of people and the civil society groups occurs at the same time in Bangkok, Thailand and in Seoul, South Korea. Two networks are organizing the two forums, first, the Laos Dam Investment Monitor (LDIM) and the Coordinated Response Team of the Korean Civil Societies for the Xe Pian-Xe Nam Noy Dam Collapse.

In accordance to the contents of our discussion, and the analysis from knowledgeable participants in the two forums, LDIM and the Korean Civil Society Taskforce wish to state and publicize our standpoints and proposal in relating to the Xe Pien- Xe Nam Noy hydropower dam in Lao PDR as below;

Firstly – STOP – Xe Pian-Xe Nam Noy hydropower dam has no legitimacy to continue – First of all, we are acknowledge that, as the result of the Xe Pien Xe Nam Noy Dam collapse on the 23rd of July, the Laos cabinet have announced on the 7th of August to carry out inspections to all existing dams in the country and decided to suspend the consideration of new investments in hydropower projects in order to review its hydropower development strategy and plans. Without knowing the next step planning take by the government of Lao PDR, we declare our understanding that Xe Pien-Xe Nam Noy project, has lost its total legitimacy to continue its original function as a hydropower dam. The dam that was planned to only sell electricity to Thailand to add up on top of the high percentage of energy surplus that Thailand already has, has killed at least 35 people, and is causing long-term suffering of another tens of thousands of people in both Lao PDR and Cambodia. The natural resources and the environment from the disaster are beyond description.  The Laos government and the consortium of the companies needs to put their primary emphasis on the operation to rescue and bring back the most possible security to peoples’ lives and future, and also the recovery of environment that is being destroyed. The severe impacts from the collapse that has been witnessed by the world needs to be admitted and learn from by the investment actors involve. After all, the investors, Laos government, the Korean government and the Thai energy authority need to accept the fact that Xe-Pien-Xe Nam Noy is now only carrying the role of an important symbol of the people, country and the global tragedy.

Secondly – DECLARATION – The most transparency and urgently declaration by the investors and authorities involved need to be in place now – The impact of Xe Pien-Xe Nam Noy collapse have gone beyond the border of the country. The expectation of the Thai, Korean, and global communities can only be met by seeing the formal and proper apologies by the SK Engineering & Construction (SK E&C), Korea Western Power (KOWEPO), the Thai power company Ratchaburi Electricity Generating Holding (RATCH) and Lao Holding State Enterprise (LHSE), in a close cooperation with the Laos government and the electricity of Thailand to the people of Lao PDR and Cambodia. The apologies have to be the first step to-wards a clear declaration on the responsibility of each investment beneficiary of the project towards lives and livelihood of the people and resources belonging to Xe Pien Xe Nam Noy, rivers and the surrounding environment.

The process of inspection by the Laos and Korean government on the overseas investment of public corporation or private sector such as the two Korean company and Thai’s Ratch is necessary. The process of the public money being used as the Official Development Assistance (ODA) in Korea also necessary to be declared and investigate by public. The responsibility by law and other legitimate frameworks and measurements needs to be declared to the public, to allow the most systematic monitoring and role-taking of any people, communities, and groups that are willing to engage to the mission that can ensure the better situation and recovery  of the affected peoples’ future, both in Lao PDR and Cambodia.

Lastly, COMPENSATION – The most urgent thing is the operation to rescue and compensate to the people affected by Xe Pien-Xe Nam Noy dam collapse on the ground. – What is presently occurring in the eyes of the public, is the denying of responsibility among the companies and authorities responsible. Instead of pushing it away, the world community is waiting to see the direct involvement of the top persons of all companies on the ground, to meet and support to the people that are still buried in the mud in Lao PDR. All the companies need to formally acknowledge that in some area, people are still in the stage of waiting to be rescued, and doing so with hunger and suffering. The work directly in Lao PDR is, therefore, the companies’ most urgent task. In the middle and long term, the problem such as the flooded the unexploded ordnance coming down from the mountain to the lower affected areas and the livelihood recovery of peoples, especially with children and the younger generation, has been estimated that to take years or possibly almost a decade from now.

With the three issues stated in this declaration, we, the Laos Dam Investment Monitor and the Coordinated Response Team of the Korean Civil Societies for the Xe Pian-Xe Nam Noy Dam Collapse, state the most important need for the participation of Laos, neighbouring countries, and the people from outside of the country to be welcomed by the Laos government. With this, we declare our commitment to continue our monitoring and work that is needed in relating to the project’s cessation – declaration and the compensation with the close involvement of the Laos government, the Korean government and the Thai government with its energy authority, in order to ensure the dignity and security of people in Lao PDR and Cambodia, the sustainability of natural resources and the environment that means everything to us.

The Coordinated Response Team of the Korean Civil Societies