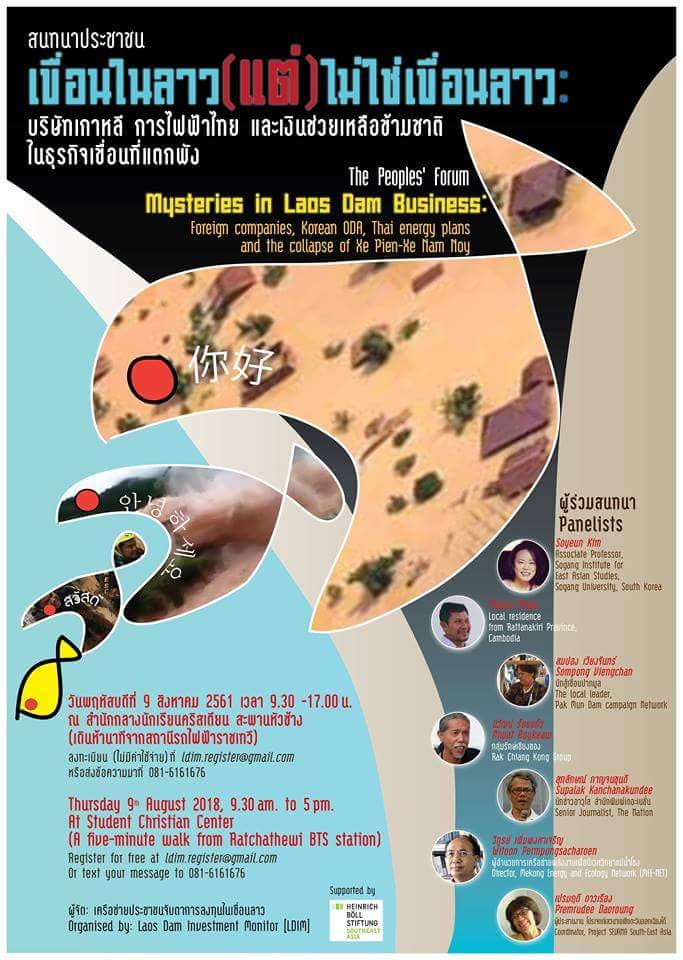 Background of the project

On the 23rd July, the Xe Pien-Xe Nam Noy saddle dam “D” collapsed with the immediate effect of approximately 175 billion cubic feet of water being released in a flash flood,       cascading down from a height of 630m above sea level into the lower stretches of the valley formed by the Xe Pien River in southern Laos. The massive collapse left the people in its way with less than 4 hours to prepare and move out from the immediate danger zone. Many affected villagers did not even get the news about the looming danger of this huge dam collapsing.  As a consequence, at least 6,000 people have been immediately affected by the flash floods triggered by the dam break. Among them, more than 30 people already confirmed dead. Washed away by the violent flood waters, dead bodies were also found in the lower stretches of the affected river system across the border in Cambodia’s Stung Treng Province.

The catastrophe triggered regional and worldwide expressions of sympathy and support for the affected people of Attapeu and Champasak provinces in Southern Laos. However, while the flow of donations and the of arrival rescue teams has been ongoing, very few people understand the root causes of that disaster, in particular, the role the underlying investment processes have played in increasing the risks. This particular hydropower project has been developed and managed by the Xe-Pian Xe-Namnoy Power Company (PNPC), a joint venture formed in 2012 by SK Engineering and Construction (Korea), Korea Western Power, Ratchaburi Electricity Generating Holding in Thailand and the Lao Holding State Enterprise. Ratchaburi Electricity Generating Holding is a private company subsidiary of the Energy Generating Authority of Thailand (EGAT). The investments provided by the Lao government as one of the project’s shareholders came through direct support from South Korea. To this end, the South Korean government provided the Laotian government with a concessional loan of US$ 80.8 million channeled via a specific Economic Development Cooperation Fund (EDCF) run by the Korea Export-Import Bank. The hydropower plant was scheduled to begin operations in 2019.

Under the signed agreements, 90% of electricity produced would have been exported to Thailand, with EGAT being the official buyer. In addition, several major Thai banks provided funding for the project: Krung Thai Bank, Tanachart, the Export-Import Bank of Thailand, and the Bank of Ayudhaya (Krung Sri).

As the above information shows, a diverse group of developers and investors have been involved in the project from the outset, playing different roles in the process of the planning and construction of the Xe Pien-Xe Nam Noy hydropower plant. Before pending issues of compensation and disaster recovery assistance might be answered conclusively, the regional and international community and in particular the people in Laos should be able to understand the patterns of responsibility among the diverse group of investors, authorities, and developers involved in the project.

This Public Forum organized in Bangkok, Thailand was planned with the aims to bring together local groups with substantive and thorough knowledge about the history and relevant technical and financial aspects of this particular hydropower project, also to help clarify and make available to the public some of the unknown and hidden facts behind the vast proliferation of hydropower plants in Laos. This includes information and analysis as to how Korean official development aid (ODA) has played a role in causing this disaster, affecting Lao communities in the South of the country. The Public Forum also discuss the response of the Korean people to this tragedy. An analysis of Thailand’s energy plan planned to be provided, and the future of Thai-Laos cooperation in the energy sector was also on the agenda, along with the positions and opinions of local people who live close to Laos and relate to the situation of the Lao people. Finally, issues of corporate accountability and the applicable human rights framework for business was also in the discussion agenda.

The one-day Public Forum was also planned to be entitled “Laos Dam Investment Monitor (LDIM)”, to highlight the aim to establish a people/citizen and activist network that pays particular attention to the situation in Laos in terms to the problematic proliferation of large-scale hydropower dam projects. The Forum was consist of two main panels, one in the morning and one in the afternoon, respectively. Korean citizens and civil society groups gathered together as a task force under the name the “Coordinated Response Team of the Korean Civil Societies for the Xe Pian-Xe Nam Noy Dam Collapse” (The Korean Task force) was also organize the parallel press conference in Korea at the same time of the Bangkok’s Public’s Forum. The two group also released the Joint Declaration that was reading and circulating in both forums in English, Thai and Korean language.

How significant of Xe Pien-Xe Nam Noy area to the Mekong plains, from Laos to Cambodia? What do we know so far about the dam collapse situation?

Our knowledge about  Laos dams and dam builders, and what we wanted to see

How Korea and the ODA ‘make dam happened’ in Laos

Xe Pien-Xe Nam Noy Dam: Benefits of Ratchburi holding and EGAT, but what about Thai people?

After the Xe Pien-Xe Nam Noy tragedy, what is the future of Laos ambitious policy to be the “Battery of Asia”?

Q/A and Discussion among participate experts and audiences

Sompong Viengchan and Meach Mean  – Future of the people after the dam, from our direct experiences